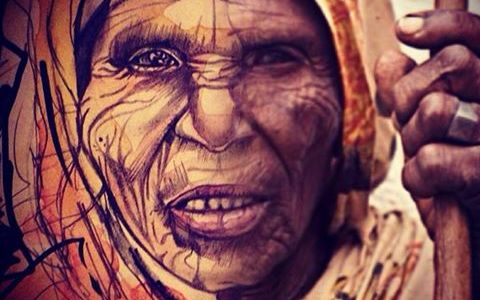 Nomadic Pop is the foundation and source influence of Digital fusion but both compared are different because this particular project allows me not to use any digital tools to develop my work however both projects are still the same but have different outcomes (in medium) visually.

Nomadic Pop begins to look at renowned Somali models, images of traditional and modern day Somalis in social status and cultural change both combine major aspects of the exploration of my work.

“Hidiyo Dhagan” > the heritage and culture within Somali art, plays a fundamental part in identifying connection points, these are; folklore, traditional music and personal stories of Somalis.
With this foundation in hand I start to understand my identity from both sides of the plate.

The test video project is based on formulating ingredients of  the Nomadic Pop project. Creating ideas  based on experimentation and development of the work, the process of each piece becomes like an ”personal attachment.” each piece of work has a characterised look, illustrative personality and its own unique story to tell.

Each piece consists of the following:

I produced each video with the help of my IPhone 5, I think that I was not focused on  how I recorded each piece, but mainly focused on covering 2D and 3D elements of the work. I do find that the videos have performative and playful qualities to them. In general, I was more aimed at setting up each piece of the work, looking for suitable background music and finally commenting back on the work on what I could change.

I think this project not only gave me great ideas on what to next but also allowed me to deeper myself into each piece of work.

Developmental ideas to consider next:

Project Gaza: This project is based on the people of Gaza/Palestine. The work is dedicated to show awareness and put light upon the current injustice that the world is facing today. To start, I made drawings, watercolor pieces, a poem and a spoken word video, all in dedication. Showing collective response, creatively voice for the people of Gaza. For me it was a personal need to contribute as and artist and poet, to show how I felt about the current state of Palestine and to share my thoughts with the world.

‘The Weaker Hand, Has Lost’

The weaker hand, has lost. Lost what? Did it lose it’s way to justice? Because we know that politics makes power. And the media is using meditating-mind-tricks to control and conceal the truth. So in fact, the weaker hand is made to be weak. Weak of choice and to weak to speak. To weak to be free, freedom needs full strength! Breathe, breathe, breathe!

Go within yourself and you will be free! Be honest, open minded, like a truthful traveler searching for the deepest truths on from the highest mount to the deepest seas on to the edge of our searching minds! Do not stop! So please breathe some more. I know it’s hard to take in. But know that the truth is greatest gift to die for, the true saviour! the real father of trust. It is trust that has a conviction for living. Comfortable is a cup of ease. This is the reason why you live and socialise with your friends and family. The reason why you eat, sleep and trust your doctors. The real reason why u go to school to learn numbers and now you earn numbers. And save these numbers in the banks, it makes sense!

Every drop of sweat your earn, creates funds, the more you have the more you are favourited. More interests, to more love is shared. More tax the more they are plotting behind your back! Thank me later!

Here’s another one! We hear free speech, loud and clear! It is crystal clear in our ears, nowadays it’s practiced in hypocrisy. Hippos and Bimboos calling shots in the office, comedy posse! Blaming the weak when they speak. Now they spend their time playing war games on board games and taking selfish selfies, mugshot! We on that danger, so much anger, to separate a nation. To create a state that breaks more then it uplifts. Takes more than it gives. Greed is in their nature, save the poor! Feed a child! So much hate is high-fived and seen as gracious.

They are the real private terrorists and the public heroes we admire. The world has become undecided, bias and sided with the unrighteous. Flying rockets, bullets made to exterminate with love. More votes to fill their pockets, kill an innocent girl on her way home, is that not shocking?!

They say it’s her fault. “We are not to blame cuz she was one of the hundreds used as shields by the terrorists. (Hamas) We have a duty to defend” Defending? It’s an excuse used for decades. Where is freedom? Or I’m I just dumb, blinded to believe that justice has a place in this world. I don’t feel it and I don’t see it! Humanity has no colour, race nor religion.

Because we know that politics makes power. And the power of the people was long forgotten, songs of lonely widows were memorised by their sons, daughters and neighbours. These cries have yet to be answered. Good intentions are choreographed by good actions. Within a fraction of a second, my eye shuts another day of injustice and internal pain.

Where would I be! If my mother never raised me to be me! No! Not even thank you will cover all the just rights of your mother but good deeds will run forever. And this counts for all the unfortunate, weak souls. Do not just sympathies and feel sorry but do your best, and be part of the change! Not the change that Obama wants to make! But a change we always wanted! It’s the plain truth!

The weak are not hopeless. For the one who ignores is most hopeless! And surely the best of us are weak of choice and we are just to weak to speak our minds! So don’t blame them for being weak but motivate them. Weak is not a low sign of status or weak of mind. But it’s rather strong in heart and mind, and weak within the space of unfortunate times. Be prepared to believe… Rise in mental rebellion. Rinse out these lousy flaws, Revised rights are revealed through cold rivers of rain! This reality is soon to be realised. The innocence of the weak, inhuman to the hands of the most powerful.

I weep even more, more when weak souls are sold out by lies, I am weak! Most of us are terrorised by the tender good news, tentacles that tend to copy and paste. Hassle with the good news to the corners of the world. Every eager soul has swallowed to much confusion, more illusion for the average Joe. Enough is enough! The earth no longer wants to hold, no longer wants be part of evil foundations. It has spoken of all good, centuries before you and me. The earth is fragile, weak as it dreams. By the mercy of God it still gives us all we can eat.

Degraded, separated but we stand tall. Strong to overcome all odds, weak yet we still prostrate in prayer even when death surrounds us! It’s wrong when bullies are praised! This is where parasites play as pharaohs in paradise! Parachute some hope to save yourself before you save others. Dedication starts within your engine.

Please don’t abuse the weak! And don’t take my goodness for weakness. Amputate my fingers, and leave me to symbolise the peace sign in silence, we are weak! They say the weaker hand, has lost. Lost what? Did it lose it’s way to justice? Because we know that politics makes power. Eventually the weak will become more weaker, death is found in the weakest spine of man. Our brave men and women are busy having breakfast inside their caves.

Why fear to speak out, has the night ever abandoned it’s gaze? Has the moon ever abandoned it’s stars? I say keep our people equal! Equal from the heart to the mind and to the soul, we love! To live together in peace but of you still hate me. Let us live without retaliation and hate. And let’s start to pray openly for a peaceful understanding of what it means to be human. Not weak nor powerful. Just human.